(THIS IS A TRAILER OF THE FILM)

“Concepts are exactly like sounds, colors or images, they are intensities which suit you or not, which are acceptable or aren’t acceptable. Pop philosophy. There’s nothing to understand, nothing to interpret. I should like to say what a style is (…) A style is managing to stammer in one’s own language.” Gilles Deleuze, Claire Parnet; Dialogues. A geography of fear. Rivers and mountains of desperation which will transform fear into a 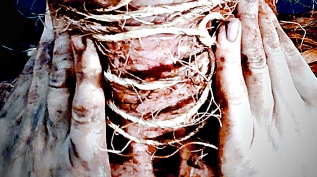 topography of flesh. The sound of human experience, of the excess of taking the plastic form of red. The delirium close to madness turned into hair in movement and lines on the painting. Chaos in life with the smell of blood which ants devour. . .   The piece is built as a map drawn by the lines of inner exploration. It’s a kind of deep dive into inner experience.

Born on March 6th, 1987, in Moscow. She studied in the Central Saint Martins College of Art and Design In London and Royal Academy of Fine Arts in Antwerp Belgium. At the age of 22 she started a personal and artistic investigation leading her to travel to diverse countries in Asia and Latin America with the aim of getting to know distinct cultures and art disciplines. In the field of Butoh dance she was engaged in studies and work with Cinthia Patiño, Natsu Nakajima, Diego Piñon, Oddance group, Marta Sponzilli. In film she has played the lead role in: Between the times, Olga Shirokostup, 2010 (independent production); Corporal evacuations, Tabatta Salinas, 2014 (independent production). In 2018 she presents her performance piece “Tartamudeos de la conciencia” (Stammerings of the consciousness) in ExTeresa Arte Actual museum in Mexico City.