I spent a while in a quiet town where, around a pond, thousand-one houses are going to be demolished. We can enter in this ghost town by a single street as the entrance of a maze. The air is stagnant, the orientation is difficult, dust hide stars. The film deals with the fate of urbanization in China. What struck me most was that people accept the demolitions despite themselves, as one accepts the rain. Government decisions are immutable like 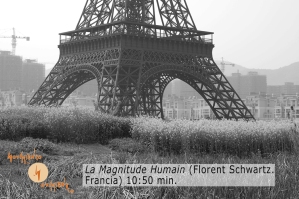 Florent Schwartz was born in 1985 in Brittany (France). He is now evolving on the edge between dance and sculpture. He pursues his research in China and Taiwan, questioning social issues linked with urbanization. His work connects visual arts to the intimacy of bodily sensations.