Terrace is part of the series Dirty Dances, which consists of nine choreographic pieces in video with very poor image quality, remixing some of the aesthetic and narrative concepts by Jonas Mekas, Martin Arnold, Peter Tscherkassky and George Kuchar. 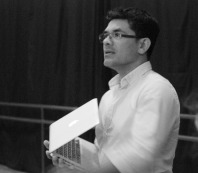 Benito González is originally from Hermosillo, Sonora. He began hir artistic training in 1988. His commitment to dance is separated and distinguished from the creative mechanisms and aesthetic postures by other members of his generation – except Evoé Sotelo, with whom he has founded and directed Quatora Monorriel since 1992. González has got a solid and coherent trajectory with his own conceptual approaches. He has collected a repertoire of more than sixty works. His creative exploration has led him to experiment also in sound composition, photography, video and graphic design. Benito González graduated in Choreography at Escuela Nacional de Danza Clásica, and entered Sistema Nacional de Creadores de Arte, FONCA, in 2010.