An old barn is the starting point for the development of the choreographic action. A woman, her obsessions and her voice —sound, word— are generators of movements and irrational situations. A spider, invisible and infallible witness of what happens. Characters immersed in an unusual and unexplained world. 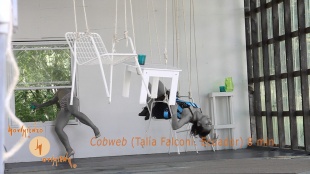 Dancer, choreographer and Ecuadorian stage artist. She developed great part of her artistic work as a choreographer and dancer in Venezuela. Founder and Co-director of Río Teatro Caribe group. (1995-2010). In 2007 she was awarded with the National Dance Award in Venezuela. In the last years she has been selected to participate in residences of artistic creation and has been invited by different companies and Institutions to mount choreographies and give workshops in Mexico, Caracas, New York, and Ecuador. Since 2010, she has developed transdisciplinary stage creations in collaboration with the Argentinian musician and composer Federico Valdez, they have participated together in different seasons and festivals internationally.

Interview to Talía Falconi, talking about her creative experience.