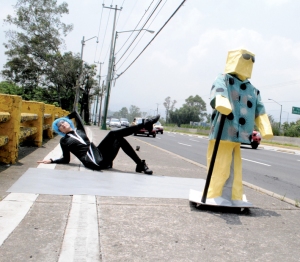 CIEGO (BLIND) is based in the novel “The Fall” by Albert Camus, where the main character shows several moral personalities. One of the personalities is of a good and generous person, an example to society. Another personality gives the idea of being cruel, despising the same persons that he helps, going to the extreme of provoking the suicide of a weak and helpless being. The suicide causes an absolute disturbance to the provocative character. In a similar way, in CIEGO, a girl who studies law and is learning the Universal Declaration of the Human Rights, finds in a blind the opportunity to practice her kindness to help him cross the street, but her kindness is transformed into selfishness, contempt and desire to damage the helpless and inferior being. The film goes from showing a bucolic, soft and light beginning to a growing aggressiveness ending in hilarious madness. This short film is based in contemporary dance-theater. (Non profit experimental film.) 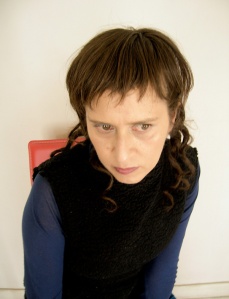 Yolanda M. Guadarrama is Mexican, started dancing in 1985, has been a choreographer since 1990 (creating about 30 pieces for different purposes). Beginning in 2007 she has been creating videodance as an alternative language different from the expression in the stage. Dance-Theater has been strongly important in her creations, she usually bases her movements in the daily body language. Yolanda has been part of the founders of some Dance groups, Production groups and Literature publishing projects (Revista Moho, Editorial Moho). She studied Industrial Engineering at the University, and decided to leave the world of the Engineering to enter to the world of contemporary dance. Most of her dance studies were in Mexico, recently she was in Berlin, where she picked some of the many options of dance training possibilities and organized (with Jenny Haack) MOTION: a videodance festival in ADA-Studio, Berlin, in 2008. At the moment she is giving birth to the project: MOVIMIENTO EN MOVIMIENTO in which series of screen dance and videodance pieces will be shown to the public two or three times a year in Museo del Chopo, Mexico City. Some of the places where she has presented choreographies or videos are: 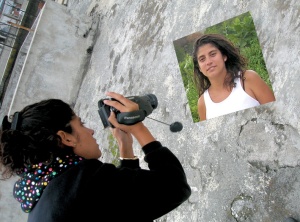 Alina was born in 1981 in Mexico City. In 2005 she moved to Berlin where she had a new approach to film and arts in general. She studied experimental film and media at Universität der Künste (UdK), Berlin. Some of her films have participated in festivals in Latin America and Europe. In 2011 she graduated, finished her MA in Art and Media, her direct professors were Heinz Emigholz, Thomas Arslan and Hartmut Bitomsky. Among her films we can mention: Body Studies (2007), Taxophobia der Film (2008), Strumming (2008), Arbeit und Freizeit (2) Fiesta y Ensayo (2009), Trampas del Tiempo (2010), Estrategias de Producción (2011). In 2007 she photographed the videodance Polinomio urbano in collaboration with Yolanda M. Guadarrama. 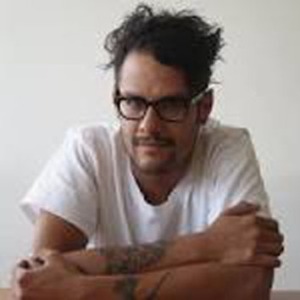 Rogelio Sosa is a sound artist, musician and promoter of experimental music and sound art. During the last 10 years his work has sought to explore the potential of various states of hearing exception while explores the intersections between sound, music, art and technology. His work includes improvisations with electronic tools, electroacoustic pieces and actions, interventions and sound installations.

He studied electronic music at the Ateliers Upic and at IRCAM. In 2003 he finished a Master in Music and Technology at the University of Paris VIII.

He currently lives in Mexico City, Rogelio led Festival Radar, he has taught at Universidad del Claustro de Sor Juana and has been curator of Decibel and Habitación del Ruido. He also was curator of sound art in Ex Teresa Arte Actual 2005-2007. Rogelio leads now Festival Aural in Mexico City.