Sin Titulo, Sub Título (Untitled, Subtitled) was originally a video installation with 2 screens facing each other and holding a conversation. Reflecting as if they were self-aware. The dialogues are taken from various fiction films. The debate of both screens is about concepts of reality, fiction and the relationship of both as media frontiers. 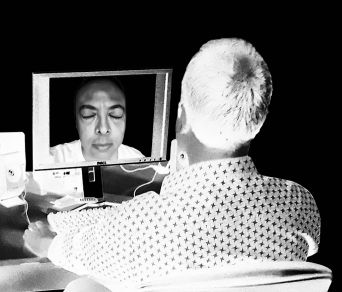 Antonio Arango has a Bachelor level as Graphic Communication Designer. He has obtained several recognitions as the 3rd place in the Third Video Biennial in the category of Experimental and Video Art (“C ++”, 1994). He was worthy with the 2nd place in the Second Month of Performance (“C ++”, 1993) and obtained Honorary Mention in the 3rd Month of Performance in Ex-Teresa Alternative Art Museum (“Panopticon”, 1994). Winner of the interactive media facade for the Goethe Institute in Mexico (“Reflex”, 2005). He obtained honorable mention in the Festival of Electronic Art Transitio 2017 with the installation “Untitled, Sub titled”. His videos and interactive installations have been exhibited in Mexico (Museums and galleries) and in several festivals and exhibitions in the United States, Spain, Canada, Germany, Brazil, France, Japan and Chile.

Jury note: By bringing these images of real and unreal bodies to the audiovisual movement, a question is brought to screendance: what bodies are allowed within this artistic genre, and what movements should be recorded? All the texts about reality and fiction, although they are too didactic, provoke the viewer to think about the necessity or the uselessness of the truth within the audiovisual dance film and screendance. It is a film that brings freshness, reflection and novelty to screendance. In addition, it is interesting how the found footage is edited into a narrative. Using the sound excerpts of some films in combination with these surreal photos, the result is a strange atmosphere. Considering the confronted images of this work as a dialogue, the reality of the actors looking at the puppets implies a surreal duplication of the spectator watching the installation.