Experimental concept work inspired by photographies by Miroslav Tichy.
Tichy was a photographer who, from the 1960s until 1985 took thousands of surreptitious pictures of women in his hometown of Kyjow in the Czech Republic, using

homemade cameras constructed of cardboard tubes, tin cans and other at-hand materials. Most of his subjects were unaware that they were being photographed. 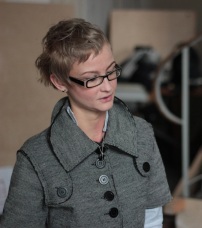 She is PhD candidate of Department of Modern Literatures and Literary Theory of the Faculty of the Humanities, DLA candidate of University of Theatre and Film Arts Budapest and artistic director of Értékmegőrző|SAFE Contemporary Art Studio Budapest. She has made at least 15 films. Her creations have been shown in different international festivals around the world.